Football
Liverpool are confident of signing Fulham’s Fabio Carvalho in the summer after missing out on Deadline Day; 19-year-old is an outstanding talent who was also wanted by Manchester United, Chelsea and Arsenal while at Balham FC
Comment and Analysis @nicholaspwright
Thursday 3 February 2022 15:00, UK
Please use Chrome browser for a more accessible video player

For Fabio Carvalho, the clamour of Deadline Day, when Liverpool tried and failed to sign him from Fulham before the 11pm cut-off point, was nothing new. He is only 19 but the biggest clubs in the country have been vying for his signature for years.
Long before lighting up the Championship with Fulham, Carvalho was causing what Greg Cruttwell, founder and chairman of Balham FC, his first club in England, describes as a “circus” of interest on the 3G pitches and concrete courts of south London.
Manchester United flew representatives down from Manchester to meet him. Chelsea took him on a tour of their Cobham headquarters. There were meetings with Arsenal and, yes, Liverpool too. “Every club under the sun,” Cruttwell tells Sky Sports with a chuckle.
Carvalho “could have gone anywhere”, according to Cruttwell, but he and his family, who had moved to London from Lisbon only a few years earlier, turned down their more prestigious suitors in favour of a move to Fulham in 2015. It is fair to say the decision has paid off.
Having excelled in Fulham’s academy, the attacking midfielder is now flourishing at senior level. This season, he has scored seven goals and provided four assists in 18 appearances, helping put Fulham on course for promotion and put himself on the path to stardom.
Carvalho now represents England at youth level but he barely even spoke a word of the language when he arrived in the country at the age of 10. For Cruttwell and Balham FC, it was not so much a case of them discovering Carvalho as Carvalho discovering them.
“He turned up at one of our U11 sessions on Clapham Common with his mum,” recalls Cruttwell. “They had moved over to London and were looking for a club for him. They weren’t living locally, but somehow, they had heard something about Balham.”
Carvalho asked to join the session and his ability was obvious almost immediately. “Within 30 seconds, one of us pinged him a ball 30 yards away, and he just pinged it straight back,” says Cruttwell. “Me and my other coach looked at each other and went, ‘OK!’
“He struck it beautifully and he was amazing in the session. His poise, his balance and his level of skill were fantastic and he had that little bit of swagger too. At the end, we asked him to come back for more sessions. After that, we took him in and he did brilliantly.”
Carvalho had been part of Benfica’s academy back in Portugal but he embraced his new surroundings at Balham and impressed his coaches as much off the pitch as he did on it.
“Our squads very much represent the demographic of inner-London, so all kinds of creeds, cultures and backgrounds,” says Cruttwell. “Fabio fitted in brilliantly and, although he was obviously a class above, he never played on that and the other boys loved him.
“He didn’t have a big-headed bone in his body. He was never like other kids who say, ‘I’m going to make it in the Premier League, I’m going to do this or that.’
“Obviously, he had that ambition but he’s the humblest kid and he has the X-factor, in terms of his personality.
“When he walks into a room, he lights it up. His smile, the way he slaps your hand. This is when he was only 10 or 11 years old and forever since. Even though he’s now flying at Fulham, he still comes back and watches Balham games. He’s just a top boy.”
Carvalho spent three years at Balham but a move to a higher level soon became inevitable, the process accelerated by a memorable performance during a six-a-side tournament in Guildford. 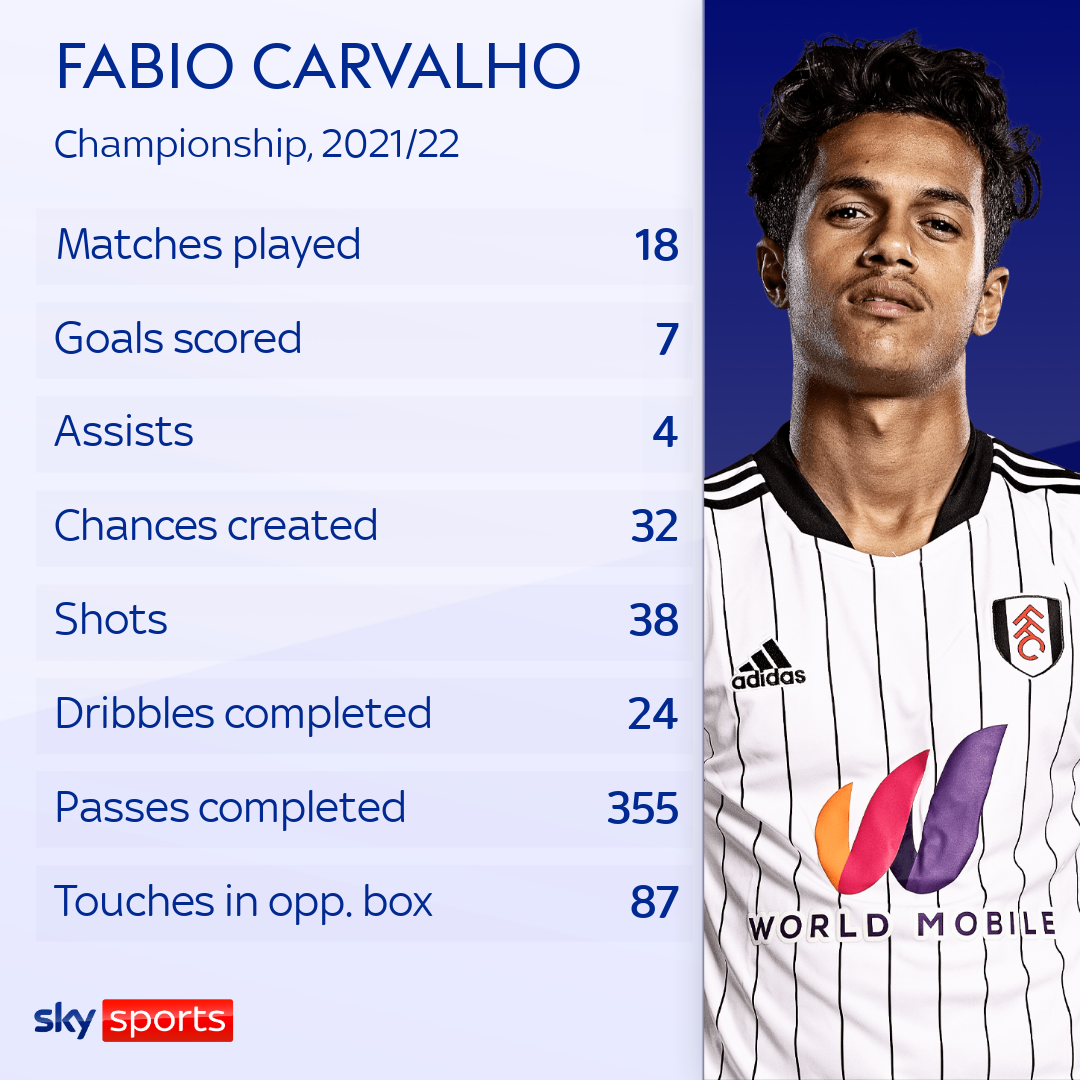 “It was peeing down with rain and I was in the clubhouse sheltering,” says Cruttwell. “We were packed in there like sardines. You couldn’t move. People didn’t know I was from Balham, but I became aware of all these teenagers shouting, ‘You’ve got to come and see this kid on pitch 12! Oh my God, he’s unbelievable!’
“When the rain stopped, there was this mass exodus from the clubhouse to that pitch. I got there and Fabio was doing rabona crosses from out wide and all kinds of tricks. It was ridiculous.
“I had already been contacted by Fulham at that point but it was after that tournament that I started to get a lot of calls from Chelsea and other clubs and the whole academy circus started.”
Carvalho had become hot property but he was unfazed by the attention and, crucially, unpressured by those close to him.
“I’ve seen thousands and thousands of parents trying to push their kids into things,” says Cruttwell. “The moment they think their kid has got a chance, they’re on it.
“Fabio’s parents weren’t like that at all. It became clear that he was going to have to go to the next level but his parents were actually happy for him to be at Balham. They weren’t pushing him.
“In fact, when we did the deal with Fulham, having met all those other clubs, they insisted he saw out the season with us because they were totally happy with his development here.”
Their trust in Balham was such that they even asked Cruttwell and the club’s goalkeeping coach Pedro Soares, a Portuguese-speaker, to help them with the decision-making process and lead negotiations on their behalf.
“They didn’t speak much English so we were aware they could have been taken advantage of by other clubs but they were really good at seeing what was best for him in the long-term,” says Cruttwell.
“Going into Chelsea was like taking him around Disneyland. Other clubs dangled every carrot possible. But Fabio’s parents saw past that. They weren’t star-struck. They saw that Fulham, which was also a category one academy, was the right place for him.”
Colin Omogbehin, now Fulham’s first-team development coach, played a key role in organising the move and Huw Jennings, the club’s academy director at the time, was similarly influential.
While the bigger clubs attempted to wow Carvalho, Omogbehin and Jennings focused on offering family support and mapping out a clear pathway for him from academy to first team. Their approach felt like a better fit for a player whose sole priority was to play.
“That’s the key thing about Fabio – he just wants to play football,” says Cruttwell. “Obviously, he was excited by the interest he was getting, but I don’t think he was that bothered about where he went.
“That’s what some of the clubs got wrong. Fabio was just as interested in playing in a pick-up game in the park across the road as he was in training at Chelsea. He just wanted to play, whether it was in a cage in Stockwell or whatever.”
Carvalho was given freedom to express himself at Balham and while the step up to professional football has brought greater physical and tactical demands, Fulham have been careful to ensure he retains the flair and spontaneity that make him so special.
“Fulham have done an excellent job with him,” says Cruttwell, and it seems Liverpool agree. The club were willing to send him back to Craven Cottage on loan until the end of the season had they been able to complete the deal on Deadline Day.
Fulham will be loathe to lose him – his contract is due to expire in the summer – but at Balham there is pride at his achievements.
“It was fantastic for us to have him for three years and we feel we gave him a good grounding,” says Cruttwell. “He’s only slight, but he’s physical. As a number 10, he’s got magic in his feet, but he’s also a magical person. I see the same kid now as I did on Clapham Common and I see the same joy in playing. He must never lose that.”
Another Saturday, another chance to win £250,000 with Super 6. Play for free, entries by 3pm.