Linda Ikeji is excited and she has every reason to be. The 36-year-old media mogul topped the list of 10 most influential women in Nigeria 2016 for VL Magazine. “Yay! I topped VL magazine’s Most Influential Women in Nigeria 2016 list,” she announced on her renowned blog.
Linda beat Folorunsho Alakija, one of the richest women in the world, Mo Abudu, one of Africa’s most successful women, and Nigerian songstress, Tiwa Savage to clinch the number one position of being the most influential woman in Africa’s most populous country last year.
“Awww, so honoured! The part of affecting people’s lives positively is the one that gladdens my heart the most,” she explained. Adding that she would be doing a lot of reach out this year. 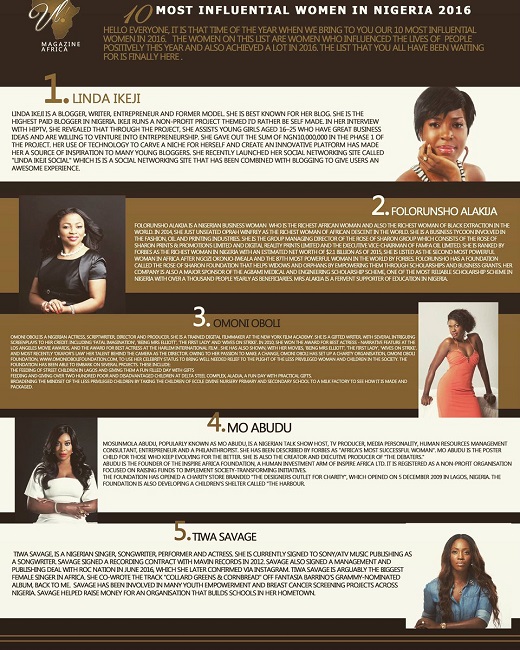 While being number one on the list is subjective to the publication, especially as the metric for the index is unknown, the blogger turned media and social media entrepreneur is deservingly one of Nigeria’s most influential women. Linda is one of the pioneers of blogging in Nigeria, an activity she picked up as a past time and has developed in the last decade to become one of Africa’s foremost news or gossip site, however you choose to describe it, with a market value of over one billion naira.
Through her blog, Linda she has often lent her voice to social change and has made an impact in the lives of several Nigerians. The Imo state native is also a philanthropist, donating millions of naira to good causes like the fight against Ebola, not to mention the occasional Linda Ikeji Blog (LIB) giveaways. On a few occasions, she has voiced her passion for giving back and making an impact just as she did with the announcement yesterday on her blog.  “I want to give back to the society. I feel like I am 10 percent done, I haven’t done 90 percent,” she stated during an interview two years ago.
However, Linda’s influence extends beyond her wealth and philanthropic activities to the fact that she serves as a role model to young Nigerian and African women. At 36, she is well worth billions of naira from the success of her blog, but that did not stop her from expanding into new territory with the establishment of an online TV network (Linda Ikeji TV), radio station (Linda Ikeji Radio), music website (Linda Ikeji Music), and very recently LIS – Linda Ikeji Social.
Whether it is pioneering the art and business of blogging or steadily building a media empire, Linda Ikeji has through a combination of hard work, consistency, innovative thinking, and creativity, cemented her status as a media mogul, and now as Nigeria’s most influential woman.