Messi Returns to the Pitch in PSG Debut 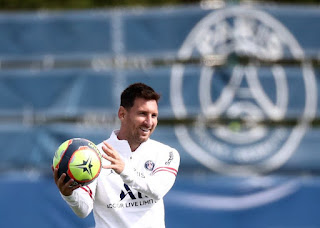 Lionel Messi has been included in Paris Saint-Germain‘s squad for Sunday’s Ligue 1 trip to Reims.

Messi, 34, signed a two-year deal with PSG with an option for a third year after his contract with Barcelona expired, but he has yet to feature in the squad since joining on Aug. 10.

PSG forward Kylian Mbappe, who is the subject of transfer interest from Real Madrid before the window shuts on Tuesday, was also included alongside Messi and Brazil forward Neymar.

Messi has not played since winning the Copa America with Argentina against Brazil on July 11.

“He is very motivated. He’s a great professional who is adapting very fast to his new teammates and to a new context,” PSG manager Mauricio Pochettino said Saturday. “He has the capacity to adapt to a new league.”

Oscar Garcia’s Reims have yet to taste defeat this season, but the former Barcelona player and academy coach is under no illusions about the danger Messi carries.

“Nobody’s ever found the formula or the way to stop him as an individual,” he said. “I’d have preferred not to face him, because it would mean that he is still at Barcelona!

“But for the French league it’s a very positive sign that the best players in the world, or the best in the world in this case, can come to this league. For me and my players it’s a challenge to play against the best team in Europe, and I would say in the world.”