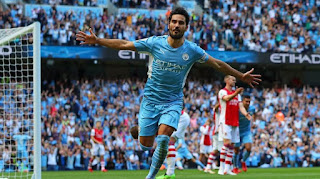 We found the goals. After Xhaka was sent off it was easier for us.

“The game was good. We had problems with the process from Ederson.

“We are the same as we have done in the two or three years in the passed. Always a club has to try to improve and have a desire to get better … but with these players we are going to go.”

“He is beyond a good manager. We were sad when he left. Sometimes people expect results immediately. Today the team he played is missing six or seven of the players. I am a big fan of him, they trust him and he will do a good job at Arsenal.”

Manchester City won 5-0 at the Etihad for the second time this season as a dismal Arsenal capitulated following the dismissal of Granit Xhaka. 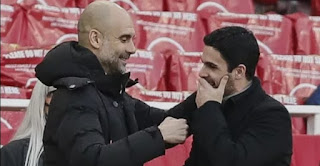 As against Chelsea a week ago, Mikel Arteta’s side started brightly but fell to pieces once Ilkay Gundogan headed home Gabriel Jesus’ cross early on. They were 2-0 down after 12 minutes when some dreadful defending allowed Ferran Torres to poke home.

Xhaka was deservedly sent off ten minutes from half time for an idiotic challenge that saw both feet off the floor and Cancelo lucky to escape injury.

Jesus added a third on the stroke of half time following fine work from Jack Grealish before Rodri made it four early in the second half. Torres added his second and City s fifth late on as Pep Guardiola s side showed no mercy.

Three games, no points and no goals represents Arsenal s worst start to a season since the war and things need to improve soon if Arteta is to remain in a job for much longer.