Kabul airport was to throw into disarray an already chaotic U.S. evacuation from Afghanistan 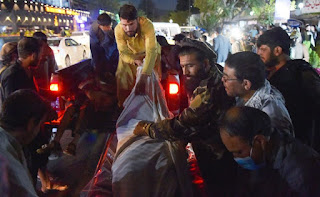 If the intention of the attacks at the Kabul airport was to throw into disarray an already chaotic U.S. evacuation from Afghanistan, the effects of Thursday’s violence are only beginning to take shape. Flights have been taking off from the airport since the explosions occurred, and President Biden said the American withdrawal will continue.

“America will not be intimidated,” Biden said.

It was a combative stance from a U.S. president who was already facing criticism for the Taliban takeover of Afghanistan, and who will now face the fallout from the attacks, which saw the deaths of dozens of Afghan civilians and 13 U.S. service members.

Thursday’s deadly attack, which came just days before Biden’s Aug. 31 deadline to withdraw U.S. forces from Afghanistan, was claimed by ISIS-K, the Islamic State affiliate in Afghanistan, according to the Associated Press and Reuters. The group posted the claim of responsibility on its Telegram channel, though NPR has not been able to independently verify the announcement.

A U.S. official confirmed to NPR that four U.S. Marines were among those killed, while Pentagon press secretary John Kirby said that the attack wounded “a number” more U.S. troops. The Associated Press reported that at least 60 Afghan civilians were killed and more than 140 others were wounded. 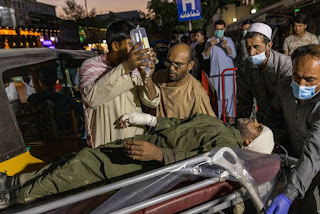 The U.S. Embassy in Kabul said the blast took place at the “Abbey Gate” of the Hamid Karzai International Airport. The gate is one of the airport entrances that the embassy had specifically asked U.S. citizens to avoid on Wednesday due to heightened fears of an attack. The Baron Hotel, where a second explosion went off, was a staging ground for many of those trying to evacuate. 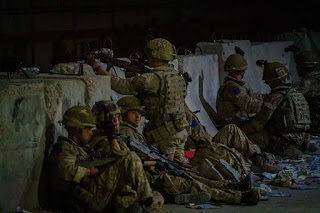 In addition to the explosions, there were reports of ongoing gunfire in the Afghan capital, according to an alert from the U.S. Embassy.