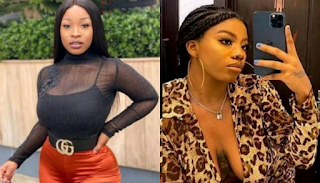 Angel and Jackie B had a conversation last night, centered on Jackie’s love interest, Michael’s personality and physical appearance.
Jackie B who admitted that she likes Michael for being smart, respectful among other things, added that being a year older than him makes it all complicated. She said;
“He’s cute but he’s younger than I am. He’s 29 and I’m 30 years old. It’s not that bad but of all the guys, I’m most attracted to him. Not completely but if I’m to put everybody together and pick one, I’ll choose him.
“Not like he wants to date me or marry him. It’s mostly ‘cruise’ but I like him. I think he’s really smart and respectful.
“I just enjoy his company but there’s an attraction for sure and it makes it easier.”
When the conversation tilted towards Michael’s d*ck size, Jackie B disclosed that she thinks it might be average. Angel countered this, saying she saw Michael’s penis when he sat down, wearing a short.
She went on to tell Jackie B not to be discouraged as some guys have a small d*ck size before a hard-on.
Jackie B however responded by saying she wasn’t surprised because she noticed he had small hands. But she also made it clear that she preferred guys with big d*cks, an attribute Angel described as “Ogbonge”.