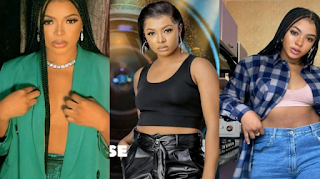 Alot has occurred between Liquorose and Emmanuel in the house ever since she found out that Emmanuel nominated her as the wild card, she believes that Emmanuel betrayed her and wanted her to leave the house. During a conversation between Emmanuel and a few other house mates, Liquorose went ahead to shed light on alot of things about herself.

During the conversation, Liquorose said that she is not a kid and she is definitely not the kind of girl that talks too much, she would rather keep quiet and bury issues inside.

She further explained that she hates disrespect alot, she hates it when people disrespect her because she is not trying to be pompous. Liquorose also said that she has seen alot of guys, she have met many guys and it will take alot for a guy to actually have her and it is a fact.

Liquorose further explained that when she tries to open up to someone and the person is trying to be cunning she won’t like it. She also said that she understands the relationship between Maria and Pere.

When the Big Brother Naija show started, Liquorose and Emmanuel were the first set of house mates that became close to one another, alot of fans even started shipping them together and anticipating a relationship between both of them. Fans thought they would be in a relationship because they were really close and they talked alot. Well things definitely did not go the way fans planned it.