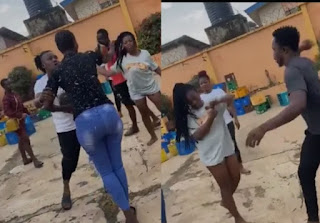 People have reacted to a video, which surfaced online, showing the moment a couple went to beat up husband s ex, over an anonymous message on WhatsApp. Mixed reactions have dropped on this video, as people shared their various perspectives on it. The husband and wife can be seen in the video, flogging the ex, due to an alleged anonymous message she posted on WhatsApp, which was detrimental to the the couple.

A lot of people, who were around at the scene, tried to stop the husband and wife from beating up the lady, but they didn t listen to them, as they can be seen, flogging the lady with cane in their hands. The content of the message was not made known to the public, but, one thing certain is that both the husband and wife were pained by the ex s message.

The husband s ex allegedly sent an anonymous message, which affected the couple negatively, resulting into the couple going for the husband s ex to beat her up. A lot of people shared their opinion on this. While some people think resorting into violence and physical assault is wrong, some people believe that there is more to the story.

Violence is never a good way to settle things. If people were not around to help the husband s ex, the lady would have been badly injured, and it might even lead to something worse.