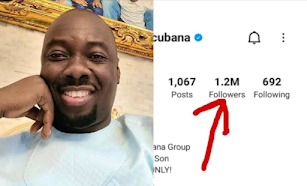 The 46-year-old man and his siblings laid their mother to rest on Friday, July 16 in Oba, Anambra state. Obi Cubana’s friends and business partners attended the ceremony.

The funeral ceremony was celebrated in style and has become the talk of the town. This is because of how money was flaunted during the burial ceremony.

The move made by Celebrity barman, Cubana Chief Priest, first sparked reactions among online users. He bought a trailer load of cows for the philanthropist. He gifted him 46 cows for the celebration.

Obi Cubana started trending on Thursday, 15 July, after Cubana chief priest gifted him cows. He continued trending after it was disclosed that he received not less than 300 cows from his associates.

He maintained the trend when videos showcased how money was sprayed during the event.

However, on sighting his verified Instagram page, Torixus observed that he has moved from 800k followers to over 1.2 million followers in 3 days. The recent disclosure showed that he gained 400,000 new fans within 72 hours.