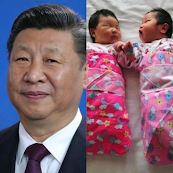 China has scrapped its controversial ‘two child’ policy and will now allow couples to have three kids.

According to Chinese state media, the move was approved by President Xi Jinping in order to aid the country’s ageing population.

This comes after Beijing abolished its infamous ‘one child’ policy in 2016 which had been in place since the late-1970s.

The government believed that the high cost of raising kids in Chinese cities deterred many couples from starting families so the two children policy wasn’t helping with population growth .

“To further optimise the birth policy, (China) will implement a one-married-couple-can-have-three-children policy,” state news agency Xinhua said in a report on Monday, 31.

The policy change will come with “supportive measures, which will be conducive to improving our country’s population structure, fulfilling the country’s strategy of actively coping with an ageing population and maintaining the advantage, endowment of human resources”, the report continues.

Early in May, a once-in-a-decade census showed that China’s population grew at its slowest rate during the last decade since the 1950s, to 1.41 billion.

Data also showed a fertility rate of just 1.3 children per woman for 2020 alone, on a par with ageing societies like Japan and Italy.