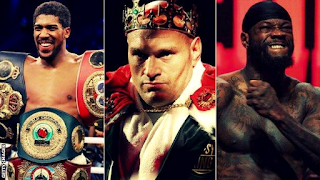 The world title fight between Anthony Joshua and Tyson Fury fight is under serious threat as Deontay Wilder has won his legal case for a trilogy bout against the ‘Gypsy King’.

The two British heavyweight champions were all set to meet in an undisputed showdown on August 14 in Saudi Arabia, however, the bout may not happen.

A judge ruled that Fury must go through with his contracted trilogy fight with Deontay Wilder by September 2021.

Recall Fury and Wilder signed a two-fight deal to meet again twice in 2020 after their first fight in 2018, which ended in a draw.

The Brit defeated the American to take his WBC heavyweight title in February 2020 and Wilder then activated his clause to force a trilogy contest.

After delays pushed the fight back several times – including an injury to Wilder and pandemic issues, Fury’s team announced that they were moving on from the contest over claims the contract had expired.

The Americans reacted by activating the dispute resolution provision within the contract, taking the matter to legal arbitration.

According to ESPN’s Mark Kriegel, the arbitrator presiding over the matter, retired judge Daniel Weinstein has now ruled in Wilder’s favour.

It’s claimed he set a deadline, insisting the pair must meet again by September 15.