Dwayne Johnson: 46% of Americans Want Actor The Rock as Next President

According to Newsweek, the poll was conducted online among 30, 138 adults in two days and there was no margin of error.

Reacting to the poll, Dwayne went on social media sharing the news and noted it was very humbling.

He hilariously described his character, saying it would be an honour to serve the people of America.

“I don’t think our founding fathers ever envisioned a six-four, bald, tattooed, half-black, half-Samoan, tequila drinking, pick up truck driving, fanny pack-wearing guy joining their club – but if it ever happens it’d be my honour to serve you, the people,” he wrote. 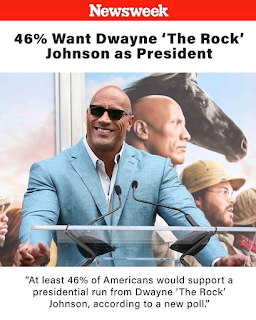 The celebrity had a profile written about him which stated that The Rock has not only conquered fame but managed to do so by being a likable and popular person.
The actor reacted to the news on his social media and posted a lengthy caption that detailed how much his journey to fame and fortune has changed his fate.
Part of the caption that Dwayne penned explained how he had not been very likable at 15 and got suspended from school for getting into fights.
He then divulged that he learned an important lesson during that time:
“True story – while I was “serving my time” on my two-week school suspension – I heard a quote that would actually help shape the rest of my life, perspective and work ethic — It’s nice to be important, but it’s more important to be nice,” the former WWE wrestler wrote.