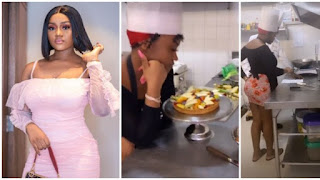 Davido’s fiancee and mother of his third child, Chioma Rowland, appears to be making progress with her dreams of becoming a successful chef.

The 25-year-old recently took to her Instagram Story to share clips from her time at The Wheatbaker hotel in Lagos where it appears she took some baking classes. In the clips, she is seen taking instructions from a chef before proceeding to do some baking of her own.

The 25-year-old shared clips from her time at bakery. Photo credit: @thechefchi Source: Instagram The beautiful chef showed off the product of her time at the bakery – a beautifully decorated cake and what appeared to be a medium-sized fruit pie. Chioma in her posts described the experience as ‘fun’ and revealed she had a vlog coming up soon.

A few days ago, it appeared the mother of one was having baby fever as she recently spoke on her desire for more children

Chioma was heard talking with some ladies in a video that has now gone viral on social media. In the short clip, the young chef revealed that she wanted to have all her children before she turned 30. The 25-year-old chef who is also a mother of one also added that she wants to have three more children.

Meanwhile, Davido trended online after videos and pieces of evidence of him cheating on his fiancee and mother of his son, Chioma, have surfaced online. As reported by Gossipmillnaija, the singer who is in the USA with his team was spotted leaving a venue with the alleged girlfriend, American model, Mya Yafai who is reported to be US rapper, Young MA’s ex.