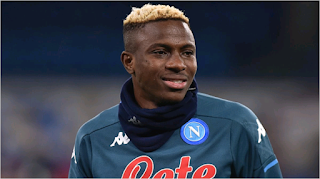 The Nigerian forward was in action until the 75th minute of the encounter before he was replaced by Andrea Pategna at the Diego Maradona stadium.

Ronaldo played full 90 minutes in the encounter but failed to save his side after Lorenzo Insigne had scored for.

Napoli manager Gennaro Gattuso has however leapt to the defence of Nigerian star Victor Osimhen who seems to be struggling at the Italian club lately.

He was also introduced in the 53th minute against Genoa in a Serie A clash but failed to inspire the club as they lost 2-1 on Saturday, February 6.

Recall that Osimhen suffered a dislocated shoulder while on international duty in November last year which consequently saw him out of action for close to three months.

Since recovering last month, the striker has not made much impact for the Partenopei, but Gattuso is however confident the young striker will be at his best soon.

The 22-year-old has scored twice in eight league appearances for the Blues this season.

He was a standout performer during the FIFA U17 World Cup in 2015 after scoring record 10 goals to help the Golden Eaglets win their fifth title in Chile.

ahead of the crucial AFCON qualifiers against Lesotho and Benin slated for March, Super Eagles coach Gernot Rohr is set to invite FC Lorient of France sensation Terem Moffi to the national team.

The 21-year-old has scored six goals so far this season as Lorient battle to stay on top of the French top-flight.

Nigeria will welcome Lesotho and then visit next-door neighbours Benin thereafter in the final rounds of the qualifying tournament for the AFCON to be played in Cameroon next year.

The Present vs The Future !! pic.twitter.com/4TME0KEYqd