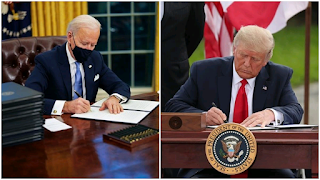 Nine of the executive orders reversed some controversial policies introduced by his immediate predecessor, Donald Trump, while the remaining borders on the new policies by the president.

This mandates the use of masks and physical distancing in federal buildings, on federal lands and by government contractors, and urges states and local governments to do the same.

2. Executive order on WHO

This stops the United States’ withdrawal from the World Health Organization (WHO) as earlier directed by Trump.

This creates the position of COVID-19 Response Coordinator who will report directly to Biden and manage efforts to produce and distribute vaccines and medical equipment.

This order extends the existing nationwide moratorium on evictions and foreclosures until at least March 31.

This extends the existing pause on student loan payments and interest for Americans with federal student loans until at least September 30.

6. Executive order on Paris climate accord

Reversing Trump’s decision, this order rejoins the Paris climate accord, a process that will take 30 days.

This cancels the Keystone XL pipeline and directs agencies to review and reverse more than 100 Trump actions on the environment.

This rescinds the Trump administration’s 1776 Commission, directs agencies to review their actions to ensure racial equity.

This prevents workplace discrimination on the basis of sexual orientation or gender identity.

This requires non-citizens to be included in the Census and apportionment of congressional representatives, reversing another Trump’s policy.

This fortifies the Deferred Action for Childhood Arrivals (DACA) after Trump’s efforts to undo protections for undocumented people brought into the country as children.

12. Executive order on some passport holders

This reverses the Trump administration’s restrictions on US entry for passport holders from seven Muslim-majority countries.

This reverses Trump’s expansion of immigration enforcement within the United States.

This halts construction of the border wall by terminating the national emergency declaration used to fund it.

This order extends deferrals of deportation and work authorizations for Liberians with a safe haven in the United States until June 30, 2022.

This requires executive branch appointees to sign an ethics pledge barring them from acting in personal interest and requiring them to uphold the independence of the Department of Justice.

This directs the Office of Management and Budget (OMB) director to develop recommendations to modernize regulatory review and undoes Trump’s regulatory approval process.