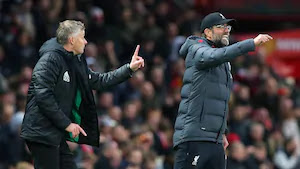 Ole Solskjaer and his wards at Manchester United have landed a big fixture in the fourth round of the English FA Cup as the Red Devils will be facing Liverpool in what is expected to be a big clash.

The 4th round draw of FA cup is done below is the list of fixtures.#KhweziSportsZone#FACup #FACupDraw 👇👇👇👇👇 pic.twitter.com/of7fTzPaAq

These two teams have been impressive this season in the Premier League and also in the English FA Cup and it will be another battle between Solskjaer and Jurgen Klopp.

According to the report on Mirror, the winner of the encounter between Manchester United and Liverpool will be facing West Ham United or Doncaster Rovers in the next round.

Bernardo Silva scores brace as Man City destroy Birmingham in FA Cup 3rd round Interestingly, Liverpool are currently topping the Premier League table with 33 points after 17 games, while Manchester United are occupying second position with the same points after 16 games.

Embattled Chelsea coach Frank Lampard and his wards at Stamford Bridge will be facing Luton Town in the English FA Cup fourth round.

Should Arsenal who are the current holders of the English FA Cup beat Shrewsbury Town in their own third round, then the Gunners will be facing Southampton in the next round. Below are the FA Cup 4th round fixtures.

Brighton and Hove Albion vs Blackpool