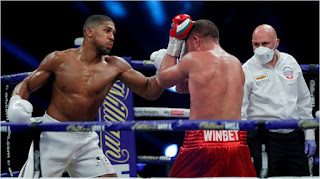 Anthony Joshua has successfully defended his WBA, WBO and IBF titles after defeating Kubrat Pulev by TKO in the 9th Round on Saturday night, December 12.

The 31-year-old Briton last fought in Saudi Arabia when he won his titles back from Andy Ruiz Jr. in December 2019.

On the night against Pulev, not much was seen in the first round as Anthony Joshua stood-off his challenger, wondering why he isn’t all-guns blazing like he was in 2014 vs Klitschko. 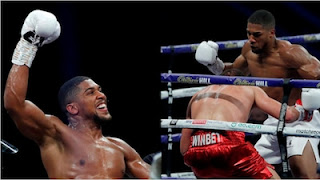 In Pound 2, Pulev’s gloves pulled off to the laughs of the Bulgarian as Joshua was the first to really unload to a huge roar from the crowd.

In Round 3, a massive right and then shot after shot after Joshua exploded but Pulev managed to walk away from AJ and was given a count by the official. AJ then scores another knockdown!

There was nothing so spectacular in Round 4, but AJ landed a big right late in the 5th round, but he couldn’t follow up this time as he did in the third.

Anthony Joshua vs Kubrat Pulev saw a masterclass from the Britons.

👑💣 BOOM!@anthonyfjoshua retains his world titles with a huge knockout! pic.twitter.com/JxaPA5vrCo

The 6th Round saw the Bulgarian show some glimpses as he produced more frequency, knowing he needed to be pro-active. Joshua, nonetheless, evaded most of his efforts and has a smile on his face as he initiates counter-jab mode.

In Round 7, AJ re-introduces the straight right/left hook combo a couple of times, combining it with uppercuts, but Pulev did well to soak up the pressure.

AJ put up more aggressive show in Round 8 and it eventually paid off in the following round dropping Pulev for a third time in the fight. And then a fourth; with seconds left in round nine, the official counts Pulev down! Joshua wins by TKO.