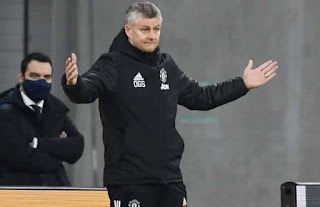 According to multiple press reports emanating from the UK, the Manchester United board is seriously considering sacking manager, Ole Gunnar Solksjaer, after the club crashed out of the UEFA Champions League into the Europa League after a 3-2 defeat to RB Leipzig on Tuesday night, December 8.

In a Champions League campaign that started so promisingly for the Premier League club, three defeats in their last four games in Group G saw them finishing third in the standings

After losing 3-1 to PSG in their previous champions league fixture, defeat at the Red Bull Arena would have seen them crash down into Europe’s secondary competition regardless of what happened in the PSG vs Ba?ak?ehir game.

Manchester City loanee, Angelino, fired the Germans into the lead within two minutes with a sizzling back-post finish.

Then Amadou Haidara doubled the Leipzig advantage during the opening 45 minutes.

The Red Devils somehow hauled themselves back into the game through Bruno Fernandes’ penalty and then a header from Paul Pogba but the result was not enough to grant them progression.

Now, multiple reports have it that the club vice-chairman Ed Woodward is frustrated with Solksjaer as no tangible result has been achieved since he took over two years ago.

Woodward also feels he has supplied Solksjaer with all his transfer targets and a £80m Maguire who keeps letting in goals .

Reports from the Sun UK, Mirror and Daily Star also suggest that the club will soon enter discussions with former Tottenham coach Mauricio Pochettino or even PSG coach Thomas Tuchel as the club has stalled under Solksjaer.