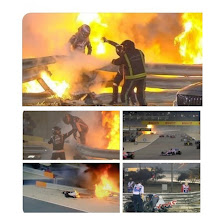 Haas driver, Romain Grosjean is fortunate to be alive after his car burst into flames and broke in half when it hit a barrier at turn three at the Bahrain Grand Prix.

All 20 cars got off the line safely at the Sakhir circuit with Mercedes driver Lewis Hamilton leading the way but at the back of the grid, there was a horrific accident which brought an immediate red flag.
Grosjean appeared to collide with Daniil Kyvat’s Alpha Tauri and went straight into the barriers with his car breaking into half on impact and going up in flames.
Surprisingly, he walked out of the horrific crash.
Footage showed Grosjean pulling himself out of the car and being attended to by medical staff.
Grosjean was taken away by the car to receive treatment at the nearby medical centre. 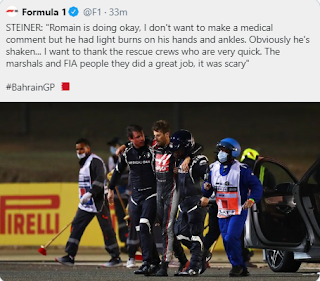 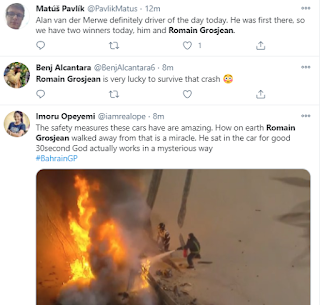 A spokesman for Haas said shortly afterwards: “Romain has some minor burns on his hands and ankles but otherwise he is ok. He is with the doctors just now.”
Sky Sports presenter Martin Brundle said: “That’s a miracle. It pierced the barriers like a can opener.
“They’re constantly trying to improve the structural stability of the chassis and that’s just saved his life. That is extraordinary.
“Romain went with the front half of his chassis.”
Hamilton tweeted from the paddock: “I’m so grateful Romain is safe. Wow… the risk we take is no joke, for those of you out there that forget that we put our life on the line for this sport and for what we love to do.
“Thankful to the FIA for the massive strides we’ve taken for Romain to walk away from that safely.”