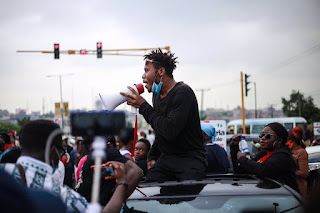 Eromosele Adene, an #EndSARS frontliner who was arrested by the police on Saturday November 7 has allegedly been moved from Lagos to Abuja.

LIB reported earlier that the singer and civil rights activist was arrested by 15 policemen at his home located in Ikeja area of Lagos. He was first taken to the office of the Commissioner of Police, Hakeem Odumosu, before being transferred to the State Criminal Investigation Department, Panti and then to Area F in Ikeja.

Punch reported that Eromosele’s sister, Onomene Adene said her brother was moved to Abuja because Lagos is the epicentre of the protest and her brother’s detention could spark a protest in the state.

Onomene revealed that when her brother’s lawyer arrived at the Area F command on Monday November 9, he was informed that Eromosele had been moved.

“He has been moved to Abuja and I think they decided to move him because they would not be able to control the outrage in Lagos.

“He was detained for over 48 hours without bail. He was first taken to the CP’s office in Lagos, then moved to Panti. When the noise started, he was moved to Area F and on Monday morning, when the lawyer visited the place, we were told he had been moved.”

The publication reported that Eromosele and some others had planned to hold a protest on Saturday and had distributed fliers to the effect which contained his phone number. Policemen were said to have got hold of the flier, tracked his phone and arrested him at his house.